ZoogVPN is a virtual private network service provider that aims to bring you the fundamentals at a low price. But how does it stack up against big names in the industry? Find out for yourself in this comprehensive ZoogVPN review.

This Greek-based VPN provider came to be in 2013. Founded by “a bunch of networking geeks and techies” who believe in a censorship-free internet with the slogan purporting, “Online Freedom and Privacy for Everyone.” And given that it boasts a complimentary plan and affordable premium subscriptions - it seems they’re being earnest.

However, the company isn’t trending, which is most likely due to its few servers. Even its premium plans have limited servers in only 26 countries.

As there is a wide range of opinions about its capabilities, I set out to determine how reliable it is and whether it protects your privacy?

Most ZoogVPN reviews agree that it doesn’t bring many bells and whistles to the table. And yet, it offers a competent bundle of functionalities.

Connection failures can and do happen now and then, and as such, a kill switch is an integral part of any self-respecting VPN. Without such, your internet privacy is possibly at risk.

ZoogVPN has a built-in feature that constantly monitors your VPN connection. If, for any reason, it drops, the kill switch is activated, disconnecting you from the internet. This makes it impossible for anyone to detect your real IP.

You can toggle the kill switch off if you prefer – though you do such at your own risk. 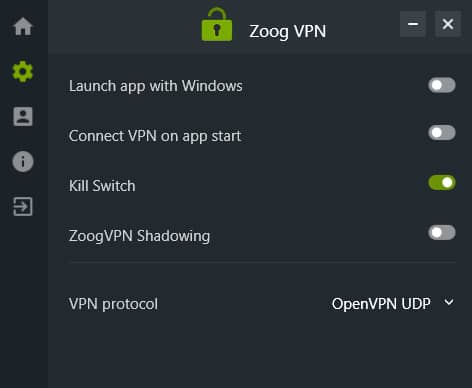 Split Tunneling lets you divide your traffic and route only some through your Virtual Private Network.

Unfortunately, ZoogVPN doesn’t support this. All your traffic will go through the virtual tunnel.

When the folks at ZoogVPN say “for everyone,” they’re not kidding. It has apps for:

Zoog can also secure your Kindle Fire, Chromebook, and routers.

The ZoogVPN free plan allows for one connection at a time. But if you move to any of the premium plans, you can maintain simultaneous connections on multiple devices. So if using various devices regularly, ZoogVPN is a great all-in-one provider.

This setting allows ZoogVPN to launch when booting up your device. This is great for ensuring all your online activity is protected from the get-go.

This is another premium plan feature, while you receive only 10GB of bandwidth with the free version. But considering its low rates, this might not be an issue. All paid plans remove the data cap and let you browse as much as possible.

ZoogVPN lets you browse all available servers and change the ones you’re using as often as you want. For each switch, you will need first to disconnect, which can be disruptive.

The company allows for no-questions-asked refunds within a week after your initial purchase.

ZoogVPN might not offer fancy features like its rival, DoubleVPN, but it does have a few tricks of its own.

Bypassing geo-restrictions is one of the primary uses for VPNs. Some countries and service providers are getting smart and using deep packet inspection to detect VPN connections and block them.

Unlike many providers, ZoogVPN has a built-in answer to that. Shadowing lets the connection pass a DPI check. This should allow you to access the service even in heavily restricted countries like China or Egypt.

The ZoogVPN server list is limited, with few servers for its fee version and only 50 for its paid plans. Its servers are in 26 countries, which can help bypass certain restrictions, but comparatively, it’s not as many as more popular VPNs offer.

On its website, ZoogVPN boasts fast speeds and reliable performance. Does it deliver on this?

From my location in Europe, I connected to three VPN servers - in the US, UK, and the Netherlands. Check out the difference below:

While download and upload speeds decreased, the reductions were in line with expectations due to distances. Likewise, the ping rates naturally increased.

And while the most significant speed drop is approximately 50%, the difference is negligible if you pick a closer server. ZoogVPN seems to hold up on the speed front confidently.

Speed is all well and good, but let’s be honest, you’re using a VPN to protect your privacy. So, is ZoogVPN safe?

Fortunately, it bases itself out of Greece, a country with a solid digital privacy record and no relation to the Fourteen Eyes alliance. As such, rest assured that your data is secure from prying government eyes.

The company does, however, store your email address. It also keeps track of the total amount of data downloaded and uploaded through its servers. On the bright side, this information is unrecognizable.

I also didn’t find any involvement in past scandals or leaks. So, all in all, the provider takes your privacy seriously.

I covered privacy – but how does ZoogVPN security perform?

They’re all available, and you can easily switch between them, depending on your preferences. Or, if you can’t decide, you can allow the client to choose for you.

With all premium subscriptions, the software uses 256-bit military-grade encryption. While with the ZoogVPN free plan, users receive the inferior 128-bit one.

On the website, the VPN boasts impenetrable protection for data leaks.

But is that really the case?

I went ahead and used ipleak.net to conduct IP and DNS leak tests.

First, let’s look at the IP and DNS addresses before the VPN test:

I then enabled ZoogVPN: 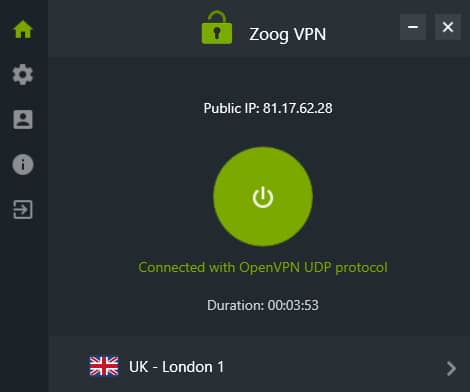 And the outcomes are:

The results show that ZoogVPN security holds up on both counts. The test proved that this service can prevent your IP and DNS address from leaking.

A VPN worth its salt should let you bypass geo-blocks and access streaming services effortlessly.

On that front, the software performed admirably. I tried unblocking Netflix and was quickly able to access its library.

Most of the time, the VPN’s fast speeds also mean you get a buffer-free streaming experience. However, it’s worth noting the connection can be unstable. While testing, I experienced several instances of ZoogVPN not connecting.

How Good Is ZoogVPN for Torrenting?

If torrenting is what you’re after, there are a few peer-to-peer ZoogVPN servers.  Additionally, with its kill switch and the zero-logs policy, it’s a safe choice for P2P sharing. Its fast speeds don’t hurt either.

And yet, ZoogVPN doesn’t make it onto our list of best VPNs for torrenting due to its small server pool. There just aren’t enough to choose from compared to the top picks.

As you know, some countries go to great lengths to prevent VPN services from breaching their geo-blocks. The Great Firewall of China is an excellent example of this.

Remember ZoogVPN shadowing? This obfuscation feature allows your Zoog traffic to pass as regular activity and bypass any geographical blocks.

Simply said, ISPs won’t be able to detect your VPN usage. And as such, you’ll be able to access geo-blocked content freely.

The website and ZoogVPN Windows client are intuitive, with no clutter. There’s virtually no learning curve for someone with limited or no prior VPN knowledge. Other ZoogVPN reviews share similar experiences.

The one drawback is that you need to disconnect from a server before connecting to a new one. It’s slightly slower, but the client makes it easy with straightforward pop-up instructions.

Individuals looking for a user-friendly product will achieve satisfaction.

I also checked out its customer support channels.

You can reach out for help through:

It also publicly lists its company address, which is reassuring and adds credibility.

When contacted through chat and e-mail with separate queries, the chat support was instantaneous and helpful. The e-mail got a reply within 10 minutes of sending and was also useful in resolving the issue.

All in all, I’m pleased with both the speed and quality of its customer service.

Let me start by saying the service offers a free version, and as far as gratis plans go, it’s decent. Still, it doesn’t give you access to all features. For example, there are only three free servers, and the encryption quality is less than what you receive with a paid plan.

The good news? With its low prices, the ZoogVPN free version may not even be necessary.

ZoogVPN’s paid plans include all features and servers and only differ in their durations.

There is also a 7-day, no-questions-asked money-back guarantee.

This provider takes pride in its affordable pricing – and it has every right.

This Virtual Private Network is fast, secure, and takes privacy seriously. Though, if you’re looking for the most cutting-edge features, it may disappoint. But with its quality service and basic capabilities at an affordable price, it may suit your needs.

And with the ZoogVPN free version, it’s easy to determine this.

Its customer service is fast and helpful, especially for such a small provider. The VPN allows for P2P sharing and streaming - meeting many users' needs.

The connection can be unreliable at times. However, the kill switch ensures you remain anonymous.

Ultimately, though, its Achilles heel lies in its number of servers. Fifty just isn’t enough to put the service on the level of more popular VPN solutions.

So is it a good VPN for you?

Hopefully, this review helps you determine this and if you need a different service, check out 2022’s best VPN options.

Yes. ZoogVPN is a bonafide VPN solution that will keep you anonymous while encrypting your data.

Yes, ZoogVPN offers a competent free plan. It also has premium plans that provide access to all the software’s features at affordable prices.

How does ZoogVPN work?

ZoogVPN offers dedicated apps for all popular platforms. After opening an account, pick your platform and download its software. The clients auto-launch and are intuitive - letting you surf the net securely with zero hassle. For more details on maximizing your use of this VPN, check out the full ZoogVPN review.

A reader who loves writing, a marketer who loves tech, a nerd who loves working out. Dilyan is FOMO personified. If he isn't reading or writing, he's probably either gaming, messing around with something on his PC, or off swimming/cycling somewhere. Oh, or playing Dungeons & Dragons.