There’s a new podcasting mic in town. Should you include it in your gear? Read my Maono PD400X review to know why audiophiles are so hyped up.

No apps for mobile

The PD400X is Maono's latest cutting-edge microphone for podcasters. It's simple yet powerful, versatile yet intuitive.

Being a Kickstarter product, this hybrid mic retails at $169. Although it’s more expensive than some top podcasting microphones out there, it costs 57% less than our priciest pick.

In addition to lifetime technical support, your purchase will come with a one-year limited warranty. It covers defects that don’t arise from wear and tear, misuse, or negligence.

Plus, your order will be subject to this award-winning global audio mic leader’s 14-day return, exchange, and refund policies.

Let’s have a look at the PD400X mic’s anatomy and capabilities.

The PD400X is a dynamic mic, so it requires no power source. This is neat when creating long-form audio content where limited battery life can be a concern.

Dynamic mics are known for their durability and water resistance. These traits may not matter to podcasters who normally record indoors. But you’d appreciate this unit’s sturdiness as time goes by.

Compared to condenser mics, dynamic ones are less sensitive. They can capture loud sounds with minimal distortion.

When conversations and commentaries get intense, they don’t produce unbearable noises. No wonder why dynamic microphones are perfect for podcasting and live streaming.

The PD400X has the unmistakable charm of Maono products. 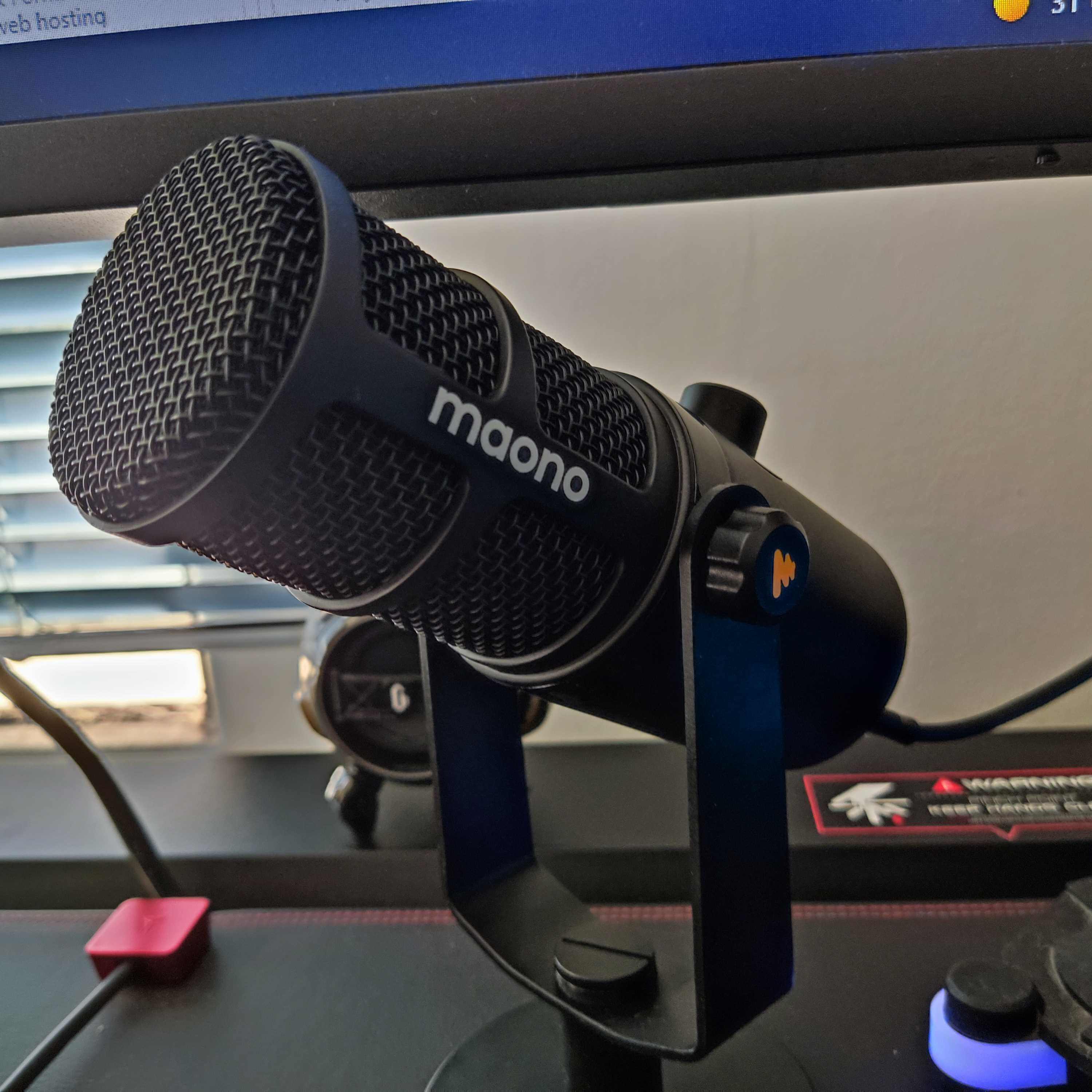 It has a good weight, helping it remain stable no matter how you set it up. As a new product, it’s early to say how resistant it is to dents. But judging by its solid construction, I could tell that it’s robust.

When it comes to its appearance, this mic’s sleek black finish is classic Maono aesthetics. It looks professional, so it’s not an eyesore on camera. And branding on its sides isn’t too prominent either.

This mic can only pick up sounds coming from its front. Unlike some podcasting microphones for beginners, the PD400X is a cardioid mic only. So, it needs you to speak into the vocal side to capture clear audio.

On the upside, it rejects ambient sound and filters out unwanted background noises.

Likewise, this microphone has the proximity effect. The nearer you are to it, the more low frequencies it can get. And if you move farther away from it, you can achieve an echo effect.

The PD400X has USB-C and XLR ports, making it suitable for both digital and analog recording. 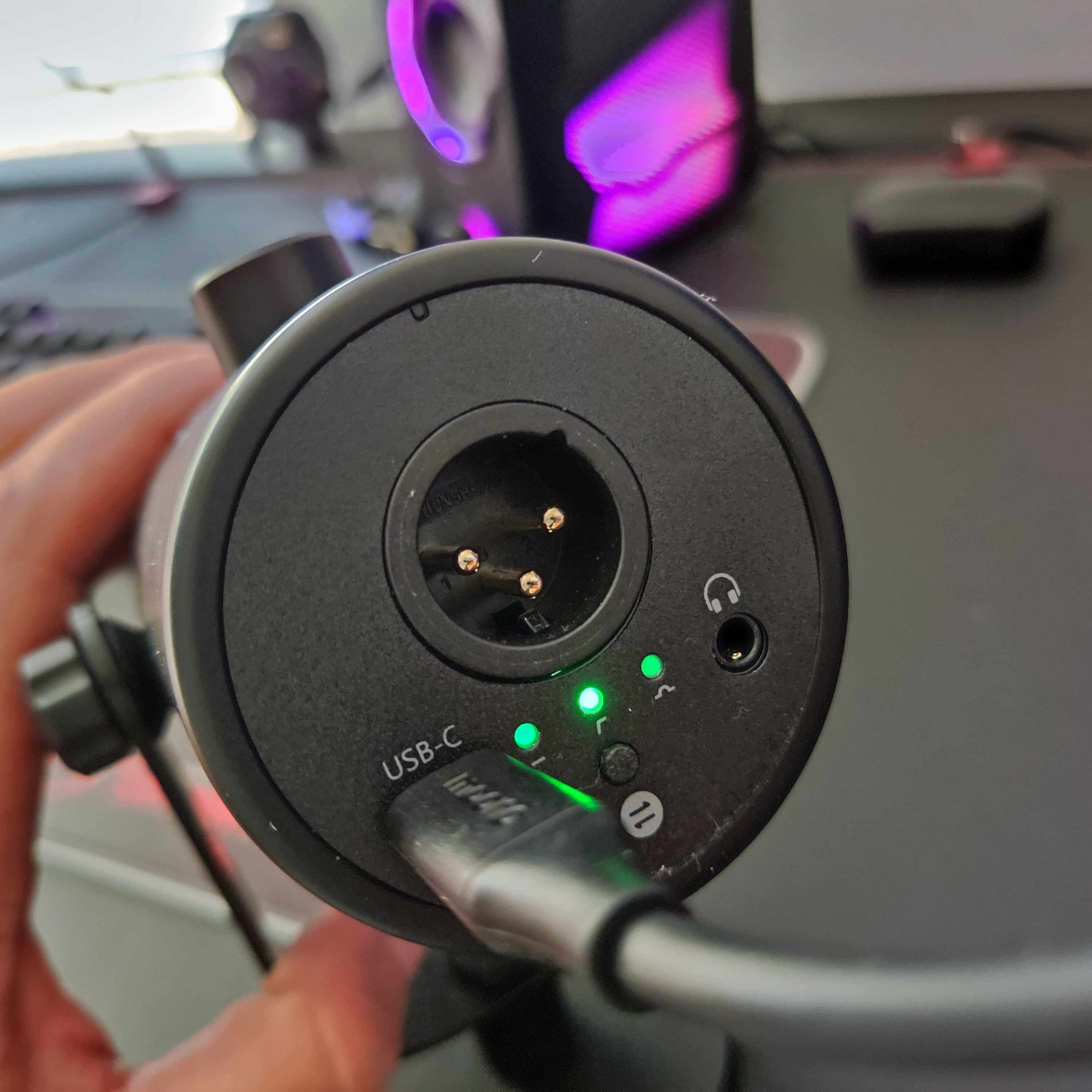 Due to its hybrid design, it lends itself to various configuration options. In other words, you can hook it up to desktops, mobile devices, and standard audio interfaces.

You can use both connections simultaneously, but the mic’s controls don’t work in XLR mode.

Another difference between USB-C and XLR configurations is sensitivity. The former has a rating of 8.5dBFS/Pa max, whereas the latter has -51dBV.

In XLR mode, at least 52 dB of gain range is a requirement. But phantom power isn’t necessary.

The PD400X is a plug-and-play mic. It doesn’t need sound cards, nor do you have to install any driver.

Also, it has nearly universal compatibility. It works well with Windows, macOS, iOS, and Android.

Regardless of the platform, expect the PD400X’s setup to not be highly technical. In three or four steps, you can set it as the default sound input source and determine your desired level.

The PD400X only has one knob for adjusting mic gain, headphone volume, and monitor mix. It’s a major departure from the usual design of podcasting microphones with multiple control knobs. 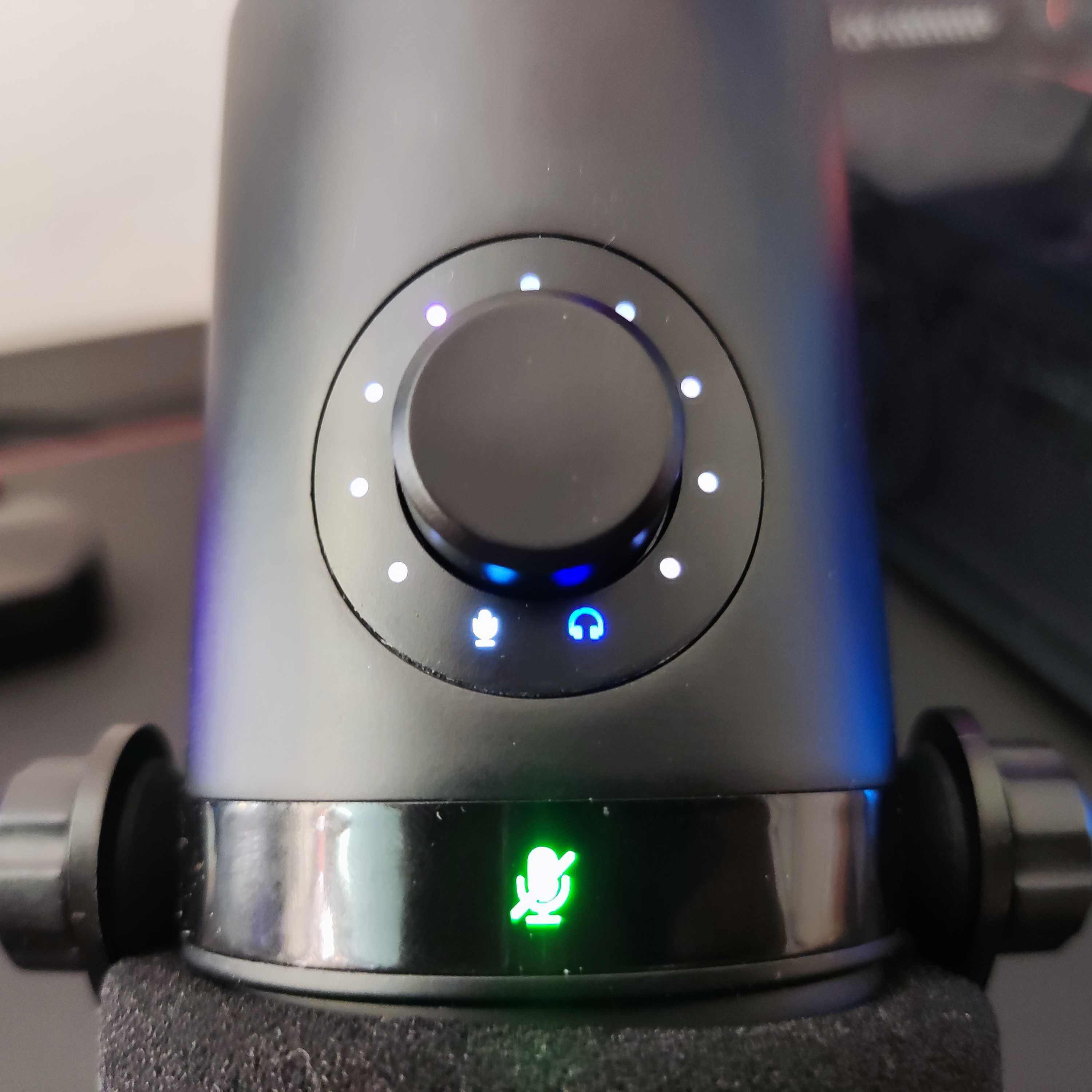 The product’s ingenious feature gives credence to its intuitiveness. Maono advertises it as a 3-in-1 knob, but it’s really 4-in-1.

Here’s how it works:

The smart knob’s three main adjustment modes are in this order:

Mic gain is a microphone amplitude booster, that allows you to change a signal’s strength before processing. It’s useful for fine-tuning the signal strength until it’s compatible with your audio equipment.

Headphone volume pertains to the loudness of the audio. Letting it get out of hand can result in hearing loss. A safe headphone volume level is anywhere between 60 dB and 85 dB.

A balanced monitor mix lets you hear your voice and the computer audio. It’s a matter of preference, so it’s up to you which one should be more dominant at a given time.

To know which mode you are in, find out if the mic and/or headphone symbols are lit. Mic refers to mic gain; headphone is for headphone volume, and mic and headphone indicate monitor mix.

If you’re in your preferred mode, turn the knob to adjust the level as you please. Let the LED lights guide you during configuration.

To switch modes, just press and hold the knob for one second.

If you enter a new mode without moving the knob for three seconds, you’ll be in microphone-level display mode.

To ensure optimum audio during your recording, make sure that all green LED lights are lit.

The PD400X has an accessible mute button, which works regardless of the setup.

To mute, the indicator should turn green to red.

To unmute, the light should change the other way around.

With this mic’s EQ adjustment button, you can become an audio engineer overnight. It lets you balance different frequencies in an audio signal with one to three taps.

For starters, wrap your head around its four functions

Unlike the smart knob, this button uses only one symbol as an indicator: the sun.

When the first of three suns is lit, it’s flat. When the second one is in green, it’s HPF. When the third isn’t grayed out, it’s presence boost. And when two indicators are on, it’s the HPF and presence boost effect.

With a short press of the button, you can switch functions as you see fit.

This dynamic microphone has a 3.5 mm headphone jack, allowing you to hear your voice directly from it. This is neat, for it eliminates the need for another hardware just to test your audio quality before recording.

The PD400X can handle basic audio processing on its own. But you can unlock more settings if you download Maono Link.

This software enables you to monitor and manage your own voice beyond what the hardware permits you.

In addition to mic gain, headphone volume, monitor mix, and mute, it has vocal tone options. For further customization, you can also play with the EQ, limiter, and compressor.

Maono Link has standard and advanced modes. As you can see below, you can easily switch between the two: 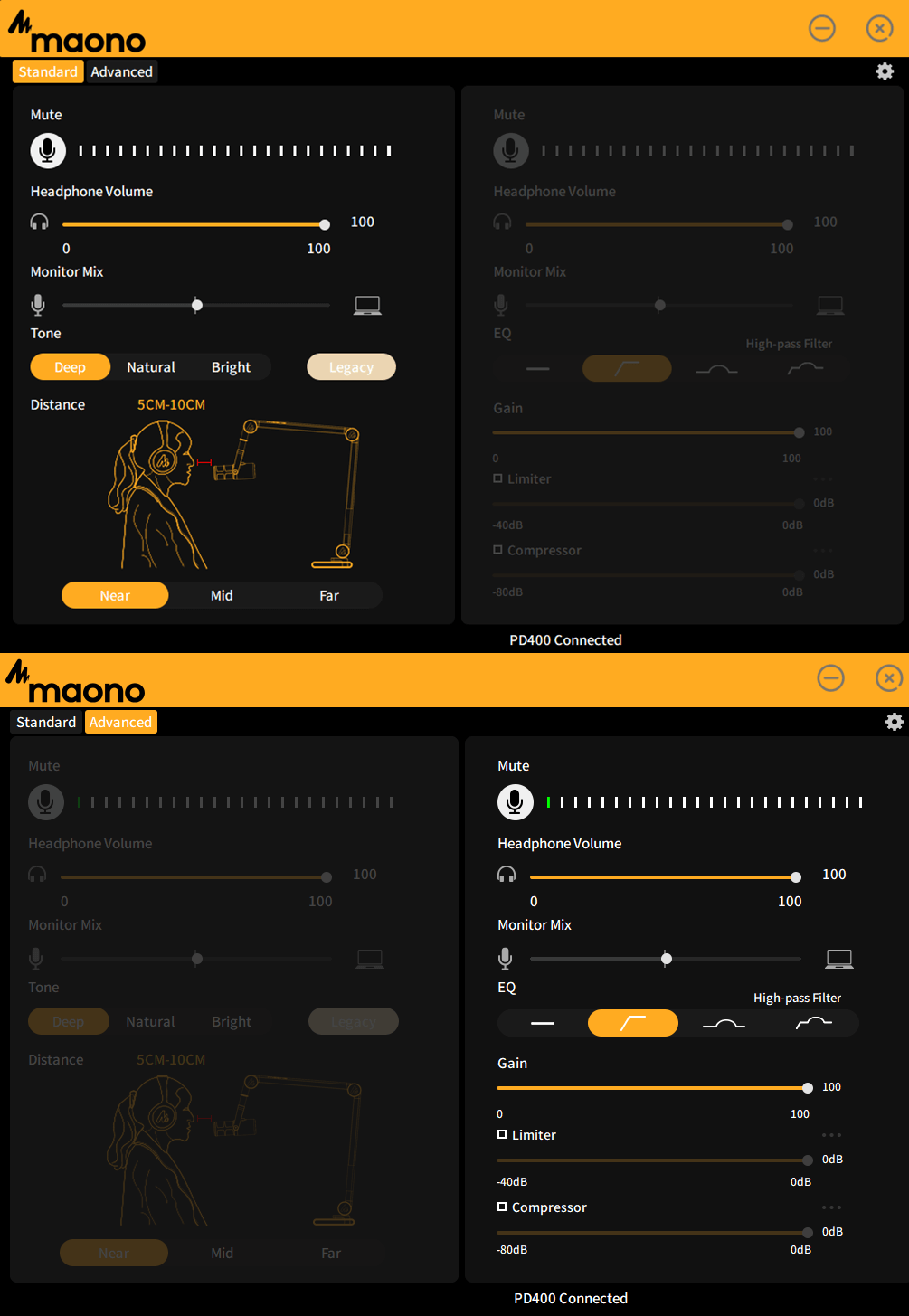 As of writing this Maono PD400X review, this software has no it has no Android and iOS editions yet.

So, it works on PCs and Macs only. As long as your computer runs at least Windows 7 or macOS 10.14, you can install it.

Maono Link syncs hardware and software settings in real time. So, you don’t have to start from scratch when you connect your mic.

The developers continuously improve it. But it’s painless to upgrade or update in case it becomes buggy or new features are available.

In the box, the PD400X should come with the following:

If something’s missing in the package, you may be able to send the merchandise back. However, you may have to shoulder the cost of shipping.

Also, the replacement item may take a while to arrive due to logistical reasons. The return process alone could take forever, for Maono might have to wait 25 days to receive the goods.

If you prefer your mic elevated, you can hook it up to standard mounts. It supports ⅜” and ⅝” connections, so you can round out your setup more easily.

The audio the PD400X processes sounds broadcast-quality and is the same in playback.

If you’re unhappy with the result, you can easily experiment with its various settings until you’re satisfied.

Since it’s a dynamic mic, you’d have to speak directly in front of it. The decrease in mic gain can be noticeable if you move a few inches away from it. Maono Link can help alleviate this limitation with its distance settings, though.

For better flexibility, you should consider connecting it to a boom arm. The stand is harder to adjust and is a bit wobbly.

Although proximity is important when using this mic, it has reliable sound rejection. Any background noises it captures are hardly audible, so expect clean recordings.

The arrival of PD400X has gotten audiophiles excited for good reasons.

Despite not working on mobile platforms yet, the optional Maono Link software can open more simplified audio processing possibilities.

The only real criticism I had during testing for this Maono PD400X review was the mic’s desk stand is a bit unstable. It wasn’t a deal-breaker, but it’s worth pointing out.

Due to its age on the market, this mic's longevity is questionable. Nevertheless, its reputable maker lends credibility to it.

So if other Maono products impress you, you may like the PD400X too.