The first thing KLIM Technologies ever made was a laptop cooler. The company has been perfecting its products ever since. Let’s check how one of its most sought-after items performs in this KLIM Ultimate cooling pad review.

Control buttons are on the back

KLIM Technologies is a Thailand-based gaming equipment manufacturer. The company first appeared in 2015 with only a $521 investment. It quickly emerged as a reliable provider and soon started making all kinds of PC peripherals.

This manufacturer has no outside investments, and it can freely decide its priorities. It does everything it can to connect and form a strong bond with its customers.

In its inventory, you can find all sorts of gadgets. It has keyboards, mice, mats, coolers, gaming headsets, and more. Among them is the KLIM Ultimate laptop cooling device I’ll be looking at here.

Now, let’s review each feature of the KLIM laptop cooler.

The KLIM Ultimate rocks a long RGB light strip that wraps around the entire device. It’s definitely not designed for subtlety, but it’s also not a detriment when you just want to focus on a game or your work. The lights have been designed to fuse well with any gaming rig. 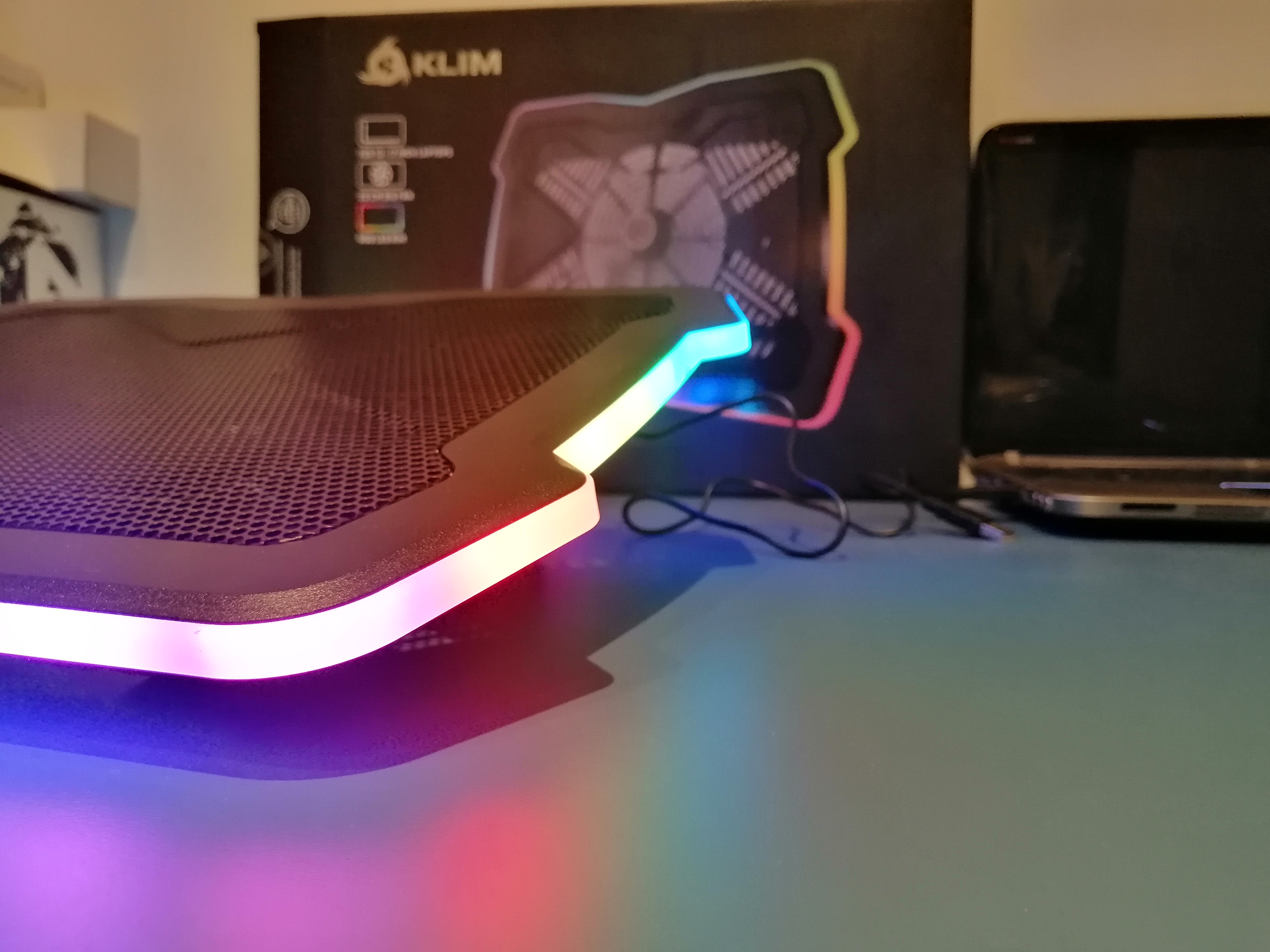 With pods like this, you usually don’t have the option to customize the color pattern. The KLIM Ultimate RGB strip, however, offers five strobing effects and seven color configurations you can choose from.

The KLIM Ultimate comes with four different height settings. The lawn chair-style mechanism allows you to choose between several angles. This can come in quite handy, especially if you work from home or have long gaming sessions.

The angle adjustment feature ensures you can support your posture in a healthy way. 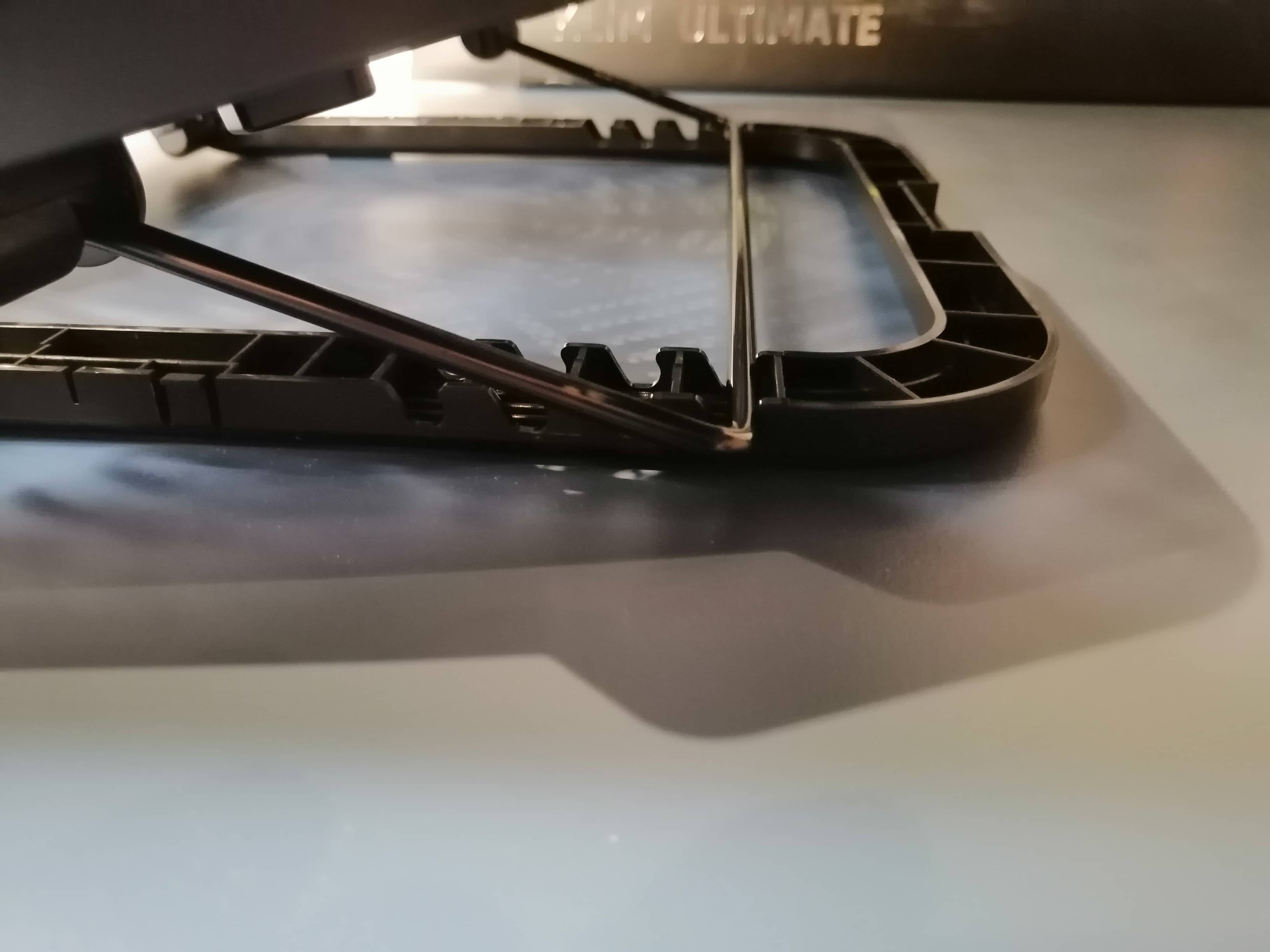 The very first product KLIM ever made was a laptop cooler. As the company’s success suggests, it has developed strong expertise in what laptop owners need.

For the KLIM Ultimate, the manufacturer went with a 200mm fan that turns at a speed of 750 RPM. That’s enough to ensure you never have to worry about your laptop overheating during gaming. 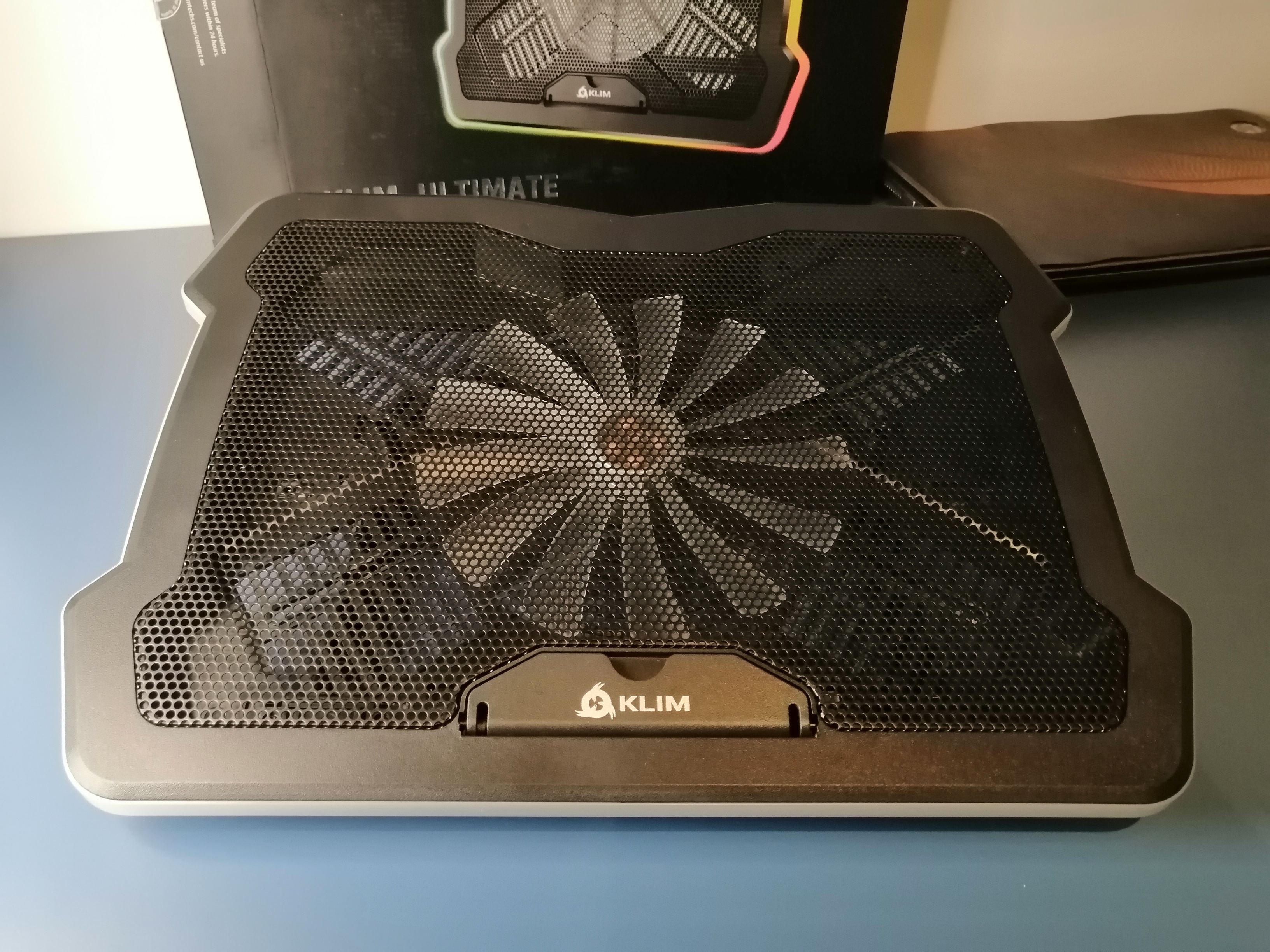 The fan inside the KLIM Ultimate isn’t just powerful, it’s also quite silent. You’ll only notice it during prolonged use, but it still won’t affect your experience.

According to the information on the website, the device only produces noise at 23 dB, which is only slightly higher than an average human breath.

My tests confirmed you can barely hear it running.

Another important thing to tackle in this KLIM laptop cooler review is the build quality. According to the info provided by the manufacturer, this product was built to last for eons.

The fan itself is protected by a metal grid panel, and the entire device is tough enough to survive any potential knocks in transit – even drops and falls.

It’s compatible with laptops ranging between 10” and 17”. Some users suggest it can handle 19” laptops, but my tests didn't confirm this as bulkier and older laptops seem to slip out easily.

It connects via a 31 inch USB cable that comes with two plugs. Of course, only one of them is needed, and you can turn the other one into an additional port using the right adapter.

The control buttons are stationed on the back, which isn’t ideal but isn’t a deal-breaker either. It makes access somewhat difficult unless you want to clumsily feel around until you find the buttons. 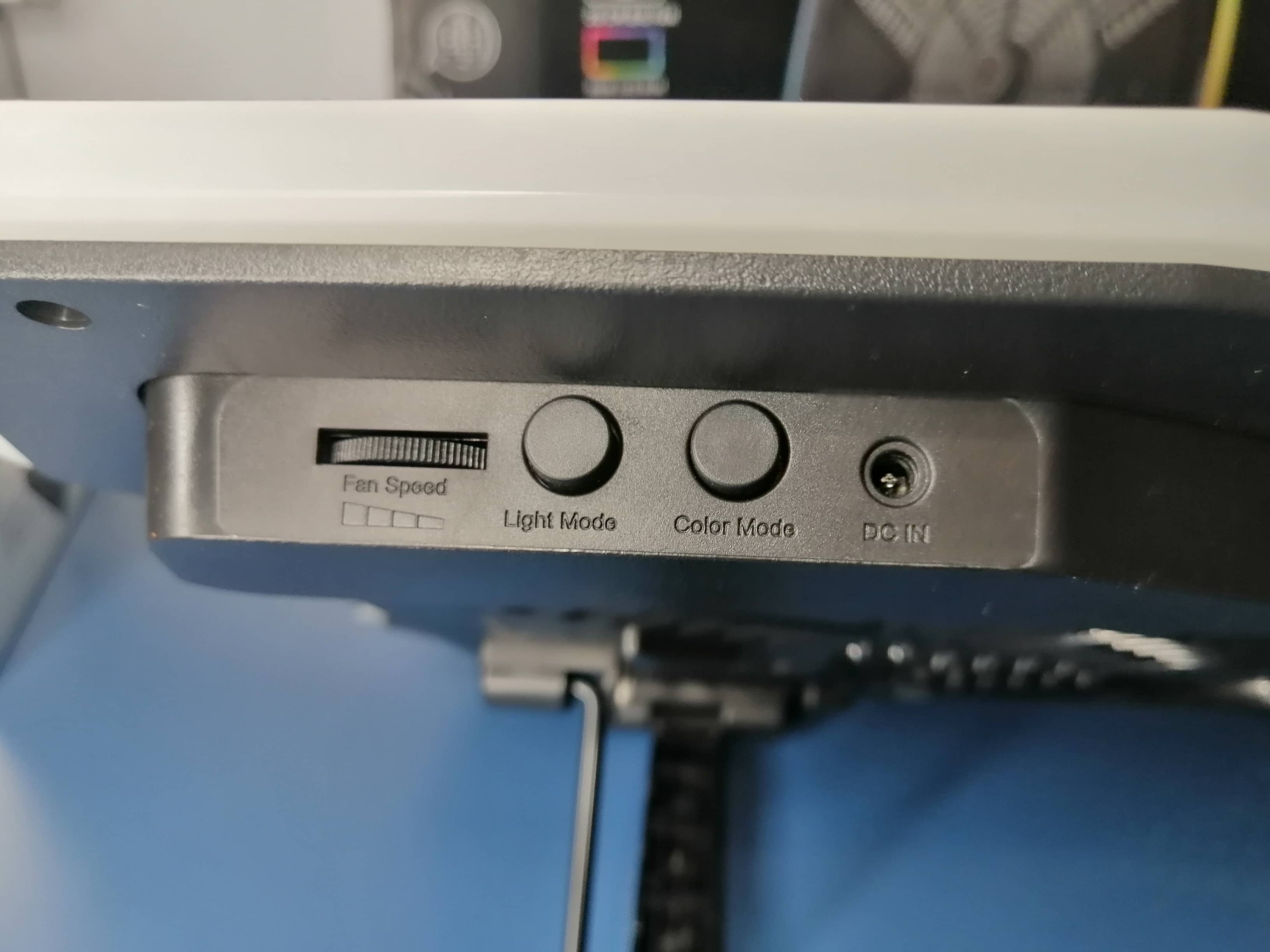 The KLIM Ultimate does a decent job of keeping your laptop cooler.

We performed a variety of tests and while the fan was on the CPU temperature never passed 158°F even with intense gaming. Regarding the GPU - the cooler did a nice job of keeping it within reasonable temperatures.

We also ran a 3D Mark test on a mid-level gaming laptop and here are the results:

It’s time to look at the KLIM Ultimate cooling pad price. You can get this cooler for $69.97 on Amazon.

You also don’t have to worry about receiving a defective or damaged pad. If you’re part of the KLIM Loyalty Program, the product comes with a 5-year ironclad warranty. So, if you encounter any issues, all you have to do is turn to the company’s customer support team. They’ll help you find a quick and easy solution to your problem.

The KLIM Ultimate price is somewhat steep, but that’s justified given everything it offers. The device has a nice-looking RGB strip, a height-adjustable design, and a powerful cooling fan.

Although somewhat sturdy, KLIM Ultimate isn’t necessarily the best option for older, bulkier laptops. However, if you have a thinner machine, you won’t encounter any problems.

Does a laptop cooler actually work?

Yes, a cooler pad does your laptop a huge favor, especially when you use it to play games. Running the latest titles can be labor-intensive for laptops, and anything you can do to keep the temperature of yours low is beneficial.

Is a cooler fan good for your laptop?

A cooler fan can help you keep your laptop’s temperature in check. However, while it’ll definitely help, don’t expect it to make some drastic changes to its gaming performance.

Can a cooling pad damage your laptop?

In some circumstances, a cooling pad could damage your laptop. This happens when the device is sucking the air from the laptop, while the preinstalled exhaust system is doing the same. That’s why you need to choose the right cooler for your device.

KLIM laptop coolers do a great job of reducing operating temperatures. The KLIM Ultimate cooling pad I tested for our review performed quite well. However, it works much better with smaller laptops than with chunkier ones. 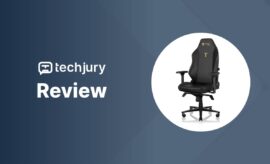 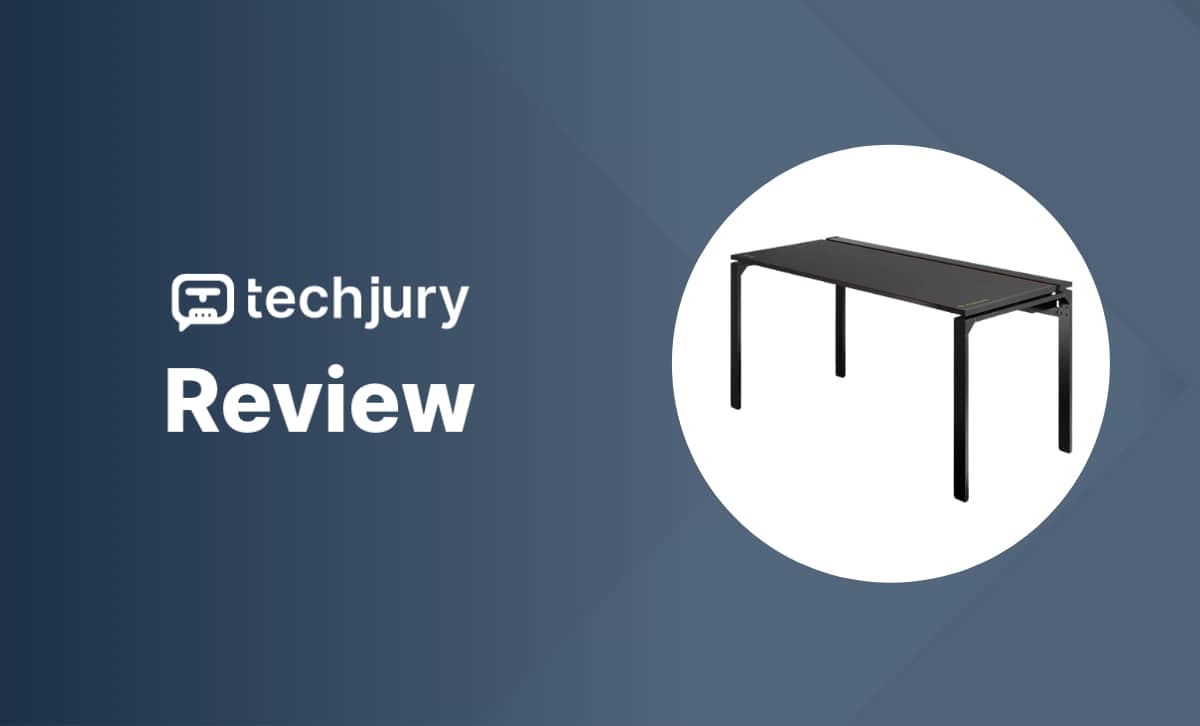 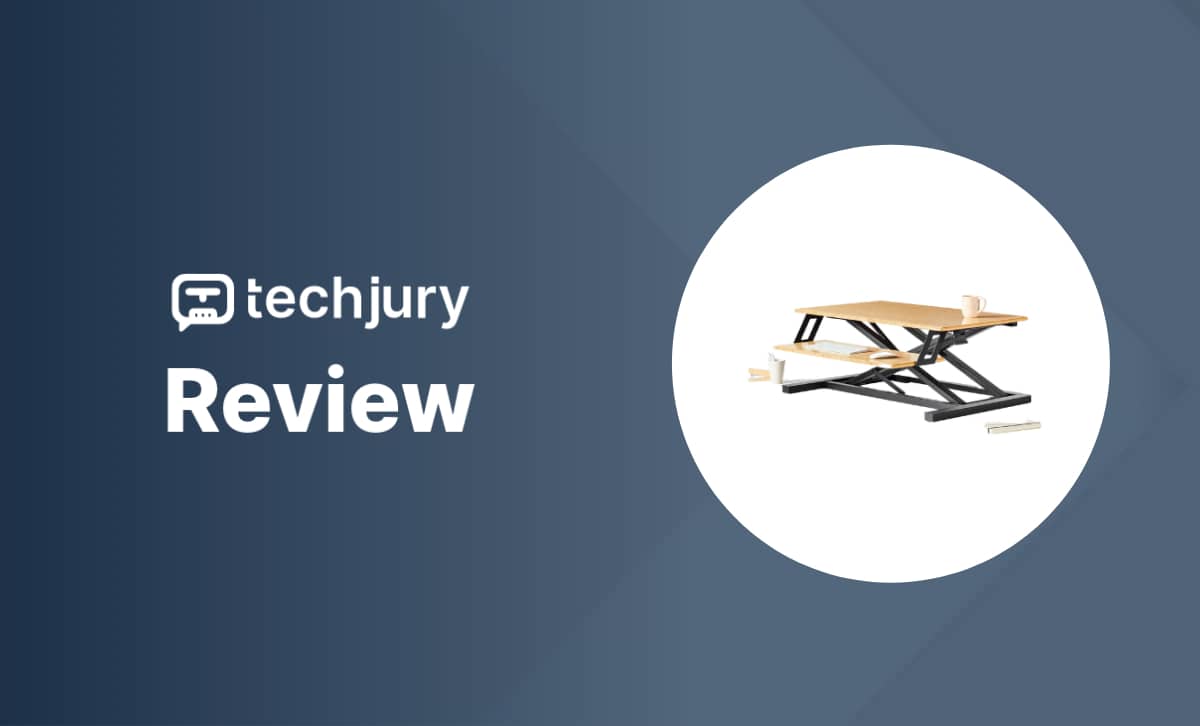